I would like to know the names of anyone who served with 2/2 in Bamberg from 66-68 that is planning on going to the reunion in Branson, MO this September? Les EvjenContinue

Dave Gettman left a comment for Les Evjen
"Les, thank you for your generous offer and continued support of the 2d Cavalry Association. Contact Frank Hurd. He is in charge of the reunions and donation programs and should be able to help you out. frankkhurd@gmail.com Always ready, sir!"
Jan 14, 2020

NEW DATES FOR REUNIONFellow Troopers: Our next reunion will be in Atlanta and will include a trip to Ft. Benning to dedicate a memorial to the fallen of the Regiment.  The dedication of the memorial could make this reunion the most memorable one we have ever conducted. The dates for the reunion are October 28-31, 2021.  A lot more details will be forthcoming as we get closer to our next reunion. To make the reunion and the dedication of the memorial a reality we need your help. With the focus…See More
Jan 13, 2020
2 Comments

Where were you stationed?
Bamberg
Coberg

What MOS or job description did you have?
Armor

What was your rank/title?
1LT

Tell us a little about your cav days.
Border Patrol HQ in Coberg
Crew qualifications at Grafenwøhr
Most excitement came with Russian invasion of Czechoslovakia in 1968. All of 7th Army changed strategic orientation from north to east - My troop sent to near Linz on Austrian border

Tell us a little about you now.
Retired in 2004 after selling drilling/well equipment founded by my wife and I in 1977. Built log home in Black Hills of South Dakota on 80 acres. Had three sons. Two oldest were both Army Rangers in 3rd Ranger BN, Ft. Benning, GA. Now divide time between writing, reading, ranching and hunting. Stay in touch with Jack Painter, F Troop CO

Name a few buddies you served with that you would like to find.
Dan Williamson, LTC back then, our Squadron Commander. Russ Richardson-How Batt Cmdr, Capt. Howden-S3, Fred Whitton-H Trp Cmdr

Les, thank you for your generous offer and continued support of the 2d Cavalry Association. Contact Frank Hurd. He is in charge of the reunions and donation programs and should be able to help you out. 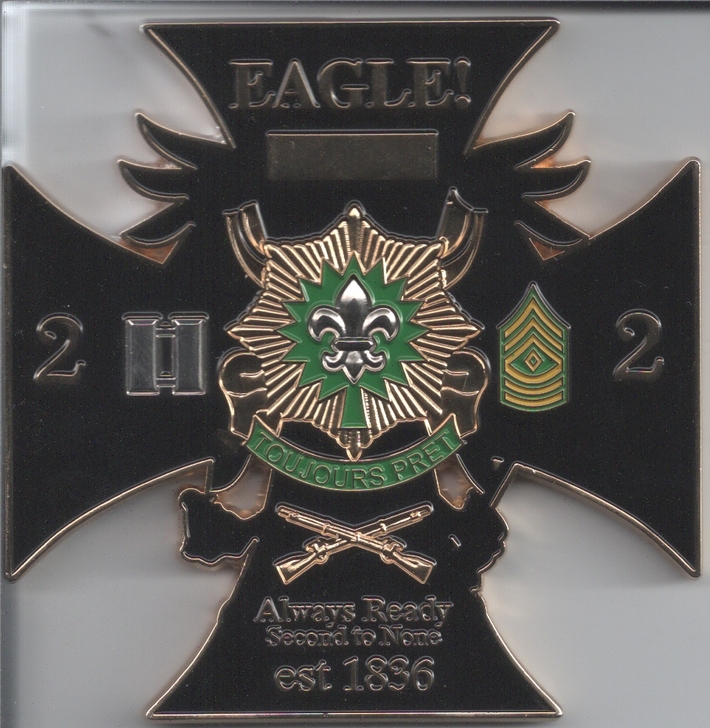 Johnny Fuller said…
What I meant to say. I miss serving with u and the second cav.

Johnny Fuller said…
I don't know if you remember me but I remember you as it was yesterday. A sharp Lt. In front of our formation in front of the barracks. Your letter for me was so much appreciated. I really miss you@

les when did you get your commision,i think that we were in the same class at knox,i graudated 10/31/66 regards tom kilgore

Belated Welcome to Dragoom Base, Les.

I was an assistant manager at the 3/2 ACR in Amberg, 1969 - '70. I asked to return to the Troop [Iron Troop] after a paraticular 1Lt. was awarded the job of Officers' Club OIC by then LTC Robert Reed.

I was honored to relate to the 3rd Squadron's Officers in some of their more relaxed and private moments. Being stand-by bartender, waiter, sometimes relief cook, I did all of the operational "Events" of the Club.  In Amberg, there was a monthly Command Formal Dinner at the Officers  Club.

I was never so proud of serving the officers as during the formal mess. Everyone [almost] on their best behaviour, wives in tow, under the watchful eye of Mrs. LTC Robert Reed.

Many of the Cav Traditions were carried out at the club: At the formal mess , the most junior officer [what-ever "new" 2nd Lt. available] had to drink all the "Nikoloshkers" they could in 15 min. I cannot recall exactly, but the ingredients were lemon wedges along with a German Liquour, the name of which I cannot recall; Also the jr. Lt.'s had to consume all the wine left from the formal dinner, which at some events was a substantial amount.

Those types of events probably ended with the New Volunteer Army after 1972, but when I was there they were  treated as sacred events and observed religiously.

Other really-fun events were promotions. LTC Reed always pinned the new 1lt or Capt. then "broke-in" their new  ensignia by bathing it in champaign - sometimes over-indulging in this part. But it always turned into a good time.

All the Officers, with only an occasional exception, were a jovial bunch with a good sense of camraderie.

I hope I may have brought back some memories, Sir. But if you hang around in here, surely you'll run across an old acquaintence, as I have.

Thank You for your contributions to the Cav. sir, and I especially admire your 2 sons in Special Op's.

May the days get longer, and the snow not-so-deep.

Les, I apologize for not responding to you sooner. Permission is not needed to join a group. Uncle SAM saw fit to make you a fellow Eagle, so that makes you part of the group already. I only started it because no one else had gotten there yet.

And here I am feeling sorry that you have to spend your winters not being able to dig out of your log habitat.     We've had several feet of snow here in NJ each of the last couple of years.  You make SD sound like Florida.

Frank Graham said…
Welcome Les!  Just talked to Jack Painter by phone last week, saw Dan Williamson as a two star commanding 3d AD in mid 1980s, Russ Richardson was a COL, IG (?) of 4th ID in early 80s, Whitton a Col in Pentagon in mid-80s. Your predecessor in E trp - Ray Baird, riffed as a MAJ in early 80s, remember Fred Rees - has been the state AG for Oregon for most of the last twenty years - must be the dean of the state AGs by now.  I retired as LTC in 92 after 25+ years.  Living the good life on the edge of the High Desert in Redmond, OR now.  Good to see you here.

Glad to be considered your friend.  Hope you can make contact with some of your old buddies or find some new ones here.  You must have some mighty cold winters out there in SD.