John Lazaro left a comment for Mark Hinckley
"So how about you?  SITREP please."
Jan 6

John Lazaro left a comment for Mark Hinckley
"Truth be told, I recanted this “hypothetical story” at a joint 2/2 OPD/NCOPD session under the title, When Murphy Gets in the Turret With You once all three of the other crew members (you) left.  Yes, you were driving open-hatched…"
Jan 6

Mark Hinckley left a comment for John Lazaro
"I thought we were not supposed to talk about that sir . Lol I am the one that was driving, open hatched , when said incident occurred. How are you doing sir ?"
Jan 5

John Lazaro left a comment for Mark Hinckley
"Now would you be the same "SPC Hinckley" who drove the M60A3 and who, together with SPC Higgens (gunner), PV2 "A-something" (loader) and 1LT Lazaro (TC), inadvertently fired a 105mm main gun round at a hill at GTA while driving…"
Jan 5

Where were you stationed?
Bamberg and Bindlach

What MOS or job description did you have?
19F,19E

So how about you?  SITREP please.

You asked me how I was doing and the answer is fine.  Completed 34 years (1980 - 2 enlisted (SMP), 1982 - 30 officer (CAV/SOF), 2012 - 2 volunteer to return to active duty (SOF)—without a break in service).  I know, LIFER; right?  Last deployment to Ass-krack-a-stan in 2012 with SOCEUR a couple months before my first retirement date.  Last jumpmaster duty was here in Germany the day before I retired in 2012.  Finally retired in May 2014.  VA Disability of course.  Live in Bamberg with my (Kraut) wife of 36 years (married her when I was in the Cav in ’85).  Throughout my career, I have always maintained a residence in Bamberg no matter where I was stationed.   One son (not in the service) 25 years old.  The USGOV (Obama Administration) closed Warner Barracks in September 2014.  What a mistake!  It’s the only place with both a 300 meter .50 cal (subcal) range AND a harbor facility.  Not to mention a low cost of living rate and great training area all on the outskirts of town.  I have been in the Kaserne only a couple of times since then as entry is by invitation only—it’s both a Federal Police Activity and a Refugee Holding Area.  Man-o-man, what memories.  Have been to the 2ACR museum in Vil-Suck a few times as well.  Donated a bunch of items.  Can you believe they did not even have a border tab so I donated my Patrol Cap with border tab and name tape on the back.  Perhaps they will display it and I’ll be famous. Ha, ha, ha.  I am really grateful to have met good folks like you along the way to Fiddler’s Green.  I hope I made even a small contribution to the success of those Soldiers placed in my care.

Truth be told, I recanted this “hypothetical story” at a joint 2/2 OPD/NCOPD session under the title, When Murphy Gets in the Turret With You once all three of the other crew members (you) left.  Yes, you were driving open-hatched and wearing sunglasses.  Believe you had already made E5 as did Higgins.  We were in H-66 (CPT Roy Geiger’s tank because H-26 would not synch). The “alleged” engagement was over the right deck at about the 2 o’clock position.  As I recall, as we drove back to the range from the CLV point (vicinity HopfenoheChurch), the conversation/fire commands went something like this….”TC:  Let’s get some training in before we get to the range.  Okay Higgens, you see that small hill to our right, that’s a T-72; got it?.  GNR:  Yes sir.  TC:  I’m going to slew the turret back to the left….here we go. Hinkley, get us up to a good steady firing-platform speed.  Driver, move out.  DR:  Yes Sir! (tank gets to about 30mph and then the TC quickly slews the main gun to the right) TC:  GUNNER, SABOT, TANK!  LDR: UP! GNR: Identified!  TC: FIRE!  GNR:  ON THE WAY!  TC: TARGET (clear sensing of a TPT-- aka Baby Sabot-- impacting the center of the “T-72” (small mound), CEASE FIRE, WHAT THE F#@k!”.  Now, of course all of this is purely hypothetical given the current command climate at the time in both H CO and at SQDRN HQ – which was zero tolerance.  The ‘crute LDR, who was fresh out of AIT, did exactly that for which he was trained (can’t recall his name but he was a highly-motivated, good Soldier).  At the end of the day, no one got hurt (thank God), no rounds landed out of safe (that’s why I switched to RNG CNTRL Freq to monitor), no one got professionally executed, we did well on table VII, and we lived to tell stories like this one.  So, is that about right (that is, if you were telling this purely fictional story to your grandkids)?

Now would you be the same "SPC Hinckley" who drove the M60A3 and who, together with SPC Higgens (gunner), PV2 "A-something" (loader) and 1LT Lazaro (TC), inadvertently fired a 105mm main gun round at a hill at GTA while driving between the ammo point and the range?

HAPPY BIRTHDAY MARK
Wishing you many more, from all of us at DragoonBase!!!

Jim Nydam said…
It's nice to here from you. I rememember some things, but unfortunately the memories are fading fast. I found that picture in my album. 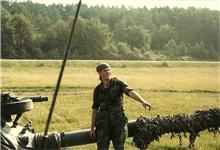