She is just not only President Obama's Girl, she is our girl too. And she loves us Troops. This is also a link to;

I know it was posted awhile ago Jesse but just came across it and wanted to say enjoyed it..... thanks

That's some scarey crap there John. He must have been pretty PO'd to heave a round clear out of the turret.

Yeah, we had to take M60 training first, then the top guys in the class got to take Sheridan training also. After all that I volunteered for the MP's and did a year and a half with them before getting in a bunch of trouble and ending up in the 2d Cav.

Wish I had copied the photos....there was a guy on the old Dragoon Base website that had photos of himself at the ammo dump using a big bottle of white glue to glue the bases back on several Sheridan rounds that came apart in shipment.

Then there were the Shillelagh guided rockets in the driver's compartment, with the heater.....

Thanks for sharing your pain there. You have M60A1 *and* Sheridan training? I will now second-guess that most Sheridan crew do have M60A1 training because Ft. Knox training would be using the M60 as far back as the 60's I'm sure.

These stories will keep the Dragoon Base alive perpetually. Gotta love it. Keep em coming.

So here's one back at ya.

1980. Bamberg Track park. PFC JUVEE (for lack of a better name because memory fails) loses it. Goes postal. This is his last day in the Cav because what he does gets him taken away stateside.

Ammo is being unloaded from all Golf Troop vehicles and placed in organized inspection rows on tarp-layered concrete, directly in front of each vehicle.

The M60-A1 has a "wet" weight of 58.6 tons. This is 2.5 tons more than "dry". The math is a back-breaking job, considering it all had to be taken out of wooden crates at the ammo dump earlier. Loaded into the "Bravos" (tanks). Then the tanks (Bravos we called them) were wash-racked and prepared for ammo inspection by removing all the ammo we just loaded into the tank a couple hours earlier at the ammo dump.

Each round had to be cleaned with rags using alcohol rubbing compound before being neatly laid in rows for inspection.

Lotta work. So it might be understandable how PFC JUVEE became unglued when after inspection we drove through that muddy trek back to the ammo dump to unload, return to base as the sun was going down, then we were told as we were washing the Bravos...

The order was from Colonel Wagner. Do it all over again. Who knows why. We were never told. Maybe the ammo dump lost count and reported missing rounds? Who knows.

We just got through a long day taking turns to get a dinner chow and this order condemned us to working late until the morning hours. Many of us were pretty thrashed, muddy, and cold. Some would miss dinner even.

This is the kind of day that makes me glad those days are over.

While we are unloading the tanks, the same way you described Dave, (one man inside handing out) I hear screaming. So do others on the ground with me. The noise is high pitched cursing from inside an M60-A1 where PFC JUVEE is/was handing out ammo.

Smiles all around. We knew this guy was young and bragged about being in jail before being given a choice by the judge, "Army or more jail." and PFC JUVEE chose Army only to end up here. And he let us all know he regretted that decision. Daily.

It was all funny until a 105 HEAT round came flying out of the loader's hatch, thrown with enough force to intentionally bypass the crewmember on the fender who was supposed to take it, safely.

Now, I remember seeign this HEAT round in the air, suspended. And my mind took a picture. Vivid to this day.

I've heard the term many times, "Asshole and Elbows." but never did I witness it on such a scale that moment when we all scattered in different directions. The HEAT round completely missed the fender and headed directly for the bare concrete, tumbling, possibly about to land nose first.

Well, did it go off?

I trained on the M60A1 prior to the Sheridan so I know all about the brass casings. Once at Ft Knox we were unloading brass from the turret after firing. We only had one pair of asbestos gloves, so I was in the turret with one glove, and my buddy was outside the loader's hatch with the other glove. I would stick my hand in the neck of the casing, hold it up for my buddy to do the same, then he would toss it over the side as I bent to pick up another.

Seemed to be working pretty well until he dropped one as I was bending over. The butt of the casing hit me square in the back of the head and took me to the floor. Damn near knocked me out cold! By the time they got me out of the turret I had blood running all down my back. Thought I split my head wide open. The medic poured ice cold water from a jerry can on my head and found it was only a small scratch. Sure rung my bell though.

Okay..... This is amazing information. I'm eating this up. You guys are a treasure chest of stories and info, apparently. I did not expect this, joining the Dragoon Base.

I enlisted in 1979 so I have little info on Sheridans, other than what my father told me about them from his 3 tours in Nam.

Firing a Sheridan sounds as memorable as any near death car crash story. LOL. Violent. Nothing like an M60 apparently. I can relate with the bore evacuator getting plugged from not being cleaned enough, or shot too often (as was our case). Happened twice to me. Blinding smoke - is a literal description. It stings the eyes. But we did have something which would probably make you appreciate the Sheridan's case-less shots. Um...damn I wish I had brought one of those empty brass 105 casings that we used in the billets for ash trays. They were so common back then. Yes I said brass, not alumininumum...LOL.  Brass! We used them in 1979.

That didnt last long though. Went to allum shortly after I got there.

Freak I can ramble. Anyway, the thing...we had casings which burned your boots up so we would buy "tanker boots" from a vendor that used to set up ON BASE in a temporary caravan styled shop. They had straps instead of shoelaces.

These casings would jam the turret almost as soon as the first shot threw it on the floor unless you had a good loader who could use his feet to control the loose casings while he loaded the next round. The loaders had practice sessions with the minimum expected load time of 1.5 seconds or better. From honeycomb to "UP".

Hey - if you guys care to enjoy an on-line game which involves tanks, do try "World of Tanks". It's free. Just dload it. I find it very arcade compared to the real thing but Gueness Book of World Records put this game on their radar this year for having the highest amount of on line players at one time, ever, in history. Any game.

I find my tank experience making me quite the rockstar there. My son turned me on to the game. Of course, he can kick my a$$ too, don't you know.

And since we're on that subject. Look for "Battlefield 3" to come out this October, which is an actual Abrams simulater/combat experience. I've seen reviews on Youtube and they are impressive.

I've never actually fired an Abrams but the A3 had the same firing computer and lase/thermal sight system. And from what I know this game is spot on to the actual firing control and reticules.

They wouldn't flip over, but they would rock you pretty well. Couldn't fire the main gun while in the water though or it would surely sink.

Another problem that disabled the system was debris left in the breech from the shell casings. They were designed to burn up when the round was fired so there was no brass casing ejected. If the evacuator system wasn't working well, you were left with a breech full of half burnt garbage and a firing system that wouldn't arm.

Real fun tank. Here are photos of one that caught fire on us one night (July 25, 1974) and exploded. I visited the site last month on the 37th anniversary. The black and whites are the official photos from the investigation. 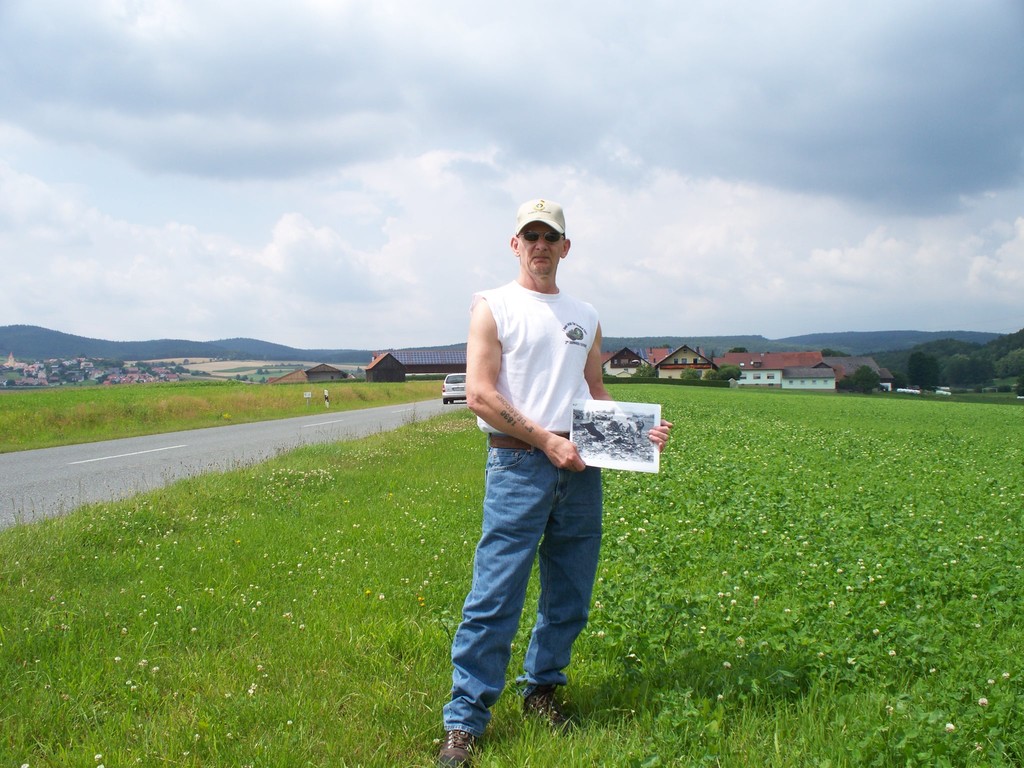 Little off-topic now, but I heard the Sheridan could accidentally flip itself when firing to it's sides? Please confirm or deny that.

Need I say I love tank topics and follow collectors and their "garages". Sheridan's never interested me at first until I began studying tanks as a hobby. Then of course it became a fascinating piece. I've never been inside one but I recognize the equipment in that photo. Seen that same Azumith in the M60 and used it at night, and got skooled on it for indirect fire.

God I hope there's a TC Over-ride handle she's sitting on.  Or a breech handle?

What is that panel if lights over the Azumith? I'm guessing firing controls of some kind. Possibly round selection?

It's the TC's hatch on a Sheridan, John. The funny thing is, I saw this exact same Sheridan (DEATHSTALKER) on a documentary recently about the 10 best tanks in the world. 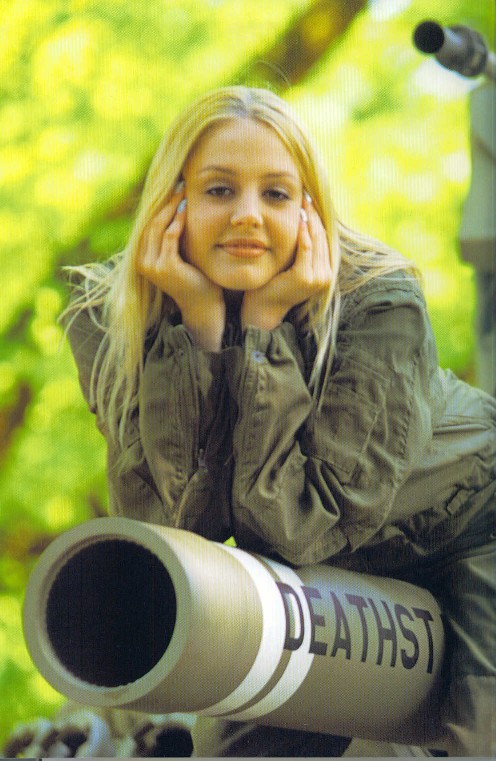 Comment by John Holbrook on August 19, 2011 at 3:50am
Which reminds me of a story about women inside a tank that another tank in my troop had the pleasure of entertaining one night on maneuvers. Seriously. I'll tell it sometime. Anyone know a guy from Bamberg named Don Parish? He could tell it first hand.