Short History of Amberg Beer Which was Your Favorite?

OUR BEER AMBERGER - BREWERIES AND RESTAURANTS

The tradition of brewing bier in monasteries in the Amberg urban area extends to the 15th Century. The Franciscan monks were brewing here already in 1490 the barley juice. In 1860 the town had 40 breweries Amberg (this also includes the Kommunbrauer, who brewed only for your own use).

By 1900, Amberg had 18 breweries in 1970 only 10: Maltese, brewery, Winkler, Schiessl, Bruckmüller, Falk, Jordan, Wingershof, chef Keller and Kummert. By the local government reform came about in 1972 the brewery Raigeringer Sterk.

The museum has a large collection of early rare brewery items and tavern jugs is issued. There are also many objects around the subject as Bierfilzl beer, beer bottle with swing top, labels, promotional signs and wheat glasses from breweries Amberger.

The stoneware jug - the Keferloher
Since about 1870, the gray stoneware jugs are produced in the Westerwald. Under the name Keferloher (a place on the outskirts of Munich) they go into the inn's history.

Two extensive private collections of beer steins from the Amberger 1880-1950 have been aquired. Among them are rarities from Stormstout, Schieferl-Brau, Aitermoser, Franciscan Bruckmüller etc. There are rare tavern jugs from the cellar Koelbl, Lindenbrünnerl, Rupprecht and restoration of the inn Mayerhofer.

The meuseum is also a tavern. Therefore, we invite visitors in our historic Bierstüberl Floor of the tower to drink up.

If one goes to Amberg, you might what to check out this museum, there are other historical items there as well.

My faviorite beir was Winkler probably because it was more available.

I'd have to say this is my favorite brewery in Amberg, since it is the only one I've been to (July  011) and they had REALLY good dopplebock bier. 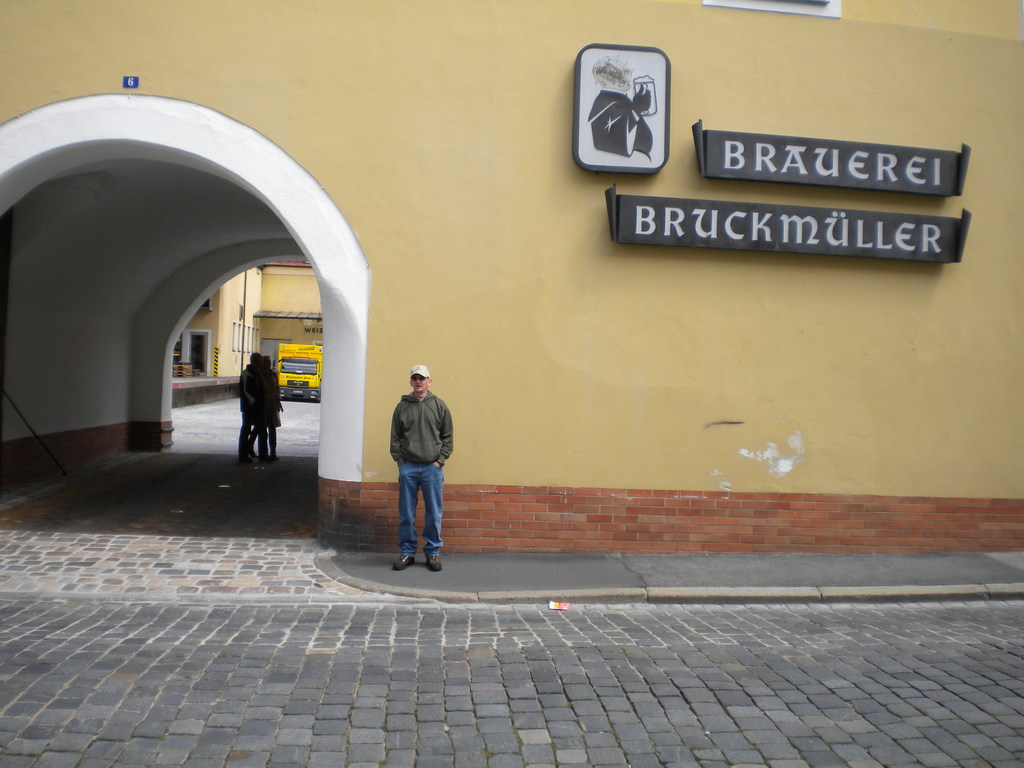 On my page I have a few  of the AMBERG coasters.

Shannon collected several coasters while we were there in 2011, including, I believe, the two in the photo there at the brewery.

One place we stopped in Nuremberg for lunch actually had packets of assorted coasters they gave us. I ended up giving all mine away.

I would have to say my favorite Bier in Amberg was Hans Falk Hefeweizen they were all good Biers but if I would have to pick one that would be it.Last July when I went over I landed at the airport in Frankfurt I got my rental car and drove straight to the Bruckmuller brewey where Dave is standing in the picture up above and bought a case of it, took me a while to find it, it had been 31 years since I had been to Amberg but it was worth the drive and then drove to My hotel in Koenigstein near Vilseck..You still have a hard time finding ice in Germany my room had no fridge so I went downstairs to the bar and asked for ice and they gave me a cup of it and that was it so the Bier stayed out on the balcony where it remained somewhat cool.Then I met Dave Gettman who had a fridge at his hotel then we had some cold Bier.

Embarrassed to say that case of bier lasted the whole time we were there, but then we did drink a lot at other places too.

Shannon would send a few bottles "home" with me at night so we would have some cold ones in the morning.Helluva good time!!!

My favorite beer while I was in Amberg was definitely the one I was drinking at that time. Being very young at that time I didn't have a whole lot beer drinking experience under my belt. But the 2 years I spent there changed all that.

as near as I can remember  I usually drank Brauhaus , probally enjoyed others as well did't master any of them !!!!

My all time favorite beer in Amberg was the Malteser Doppelbock.

I actually had my wedding reception in the Monastery.

I did drink a lot of FalkWeizen and Schiessl Weizen while there. Brauhaus......now that bier sucked!

Winkler Bier was my favorite and no better place then the Winkler Frau just off post and down the hill a little ways and it seemed she was open all night long too..

By the Winkler Frau do you mean the little old bier lady that sold the cases of bier out of the celler of her house? If it is we would go there all hours of the night usually with bags of pfennigs and several racks of empty biers for exchange. Felt sorry for her waking her up at all hours of the night. But she didn't seem to mind when we gave her some packs of marlboro reds for her troubles. If it isn't her your talking about please disregard this.

Thank you for sharing this. Damn I must tried all of them a few times and now most of them are gone.