The Honorary Squadron of the 2d Dragoons For members who have been "Entered on the rolls of The Honorary Squadron, Second Dragoons Regiment

You need to be a member of The Honorary Squadron of the 2d Dragoons to add comments!

Initially entered on the rolls of 1/2 Cav 10 October, 1984 for "Performing Outpost and Patrol Duties along the Eastern Border of the Federal Republic of Germany". Signed by LTC Douglas J. Richardson.

As I mentioned a few years ago, 1st Squadron, 1st Cavalry, 1st Regiment of Dragoons assumed the Border Mission in 1977. Camp Pittman was 1/1 Cav's Primary Camp. 1/1 fell under the 2nd ACR BOSOP and CMD.

In October, 1984 there were four Warsaw Pact Divisions operating on the Border. Three operating right up on the Border. B Troop 1/1 was occupying Camp Gates at the time and once that tour was over roadmarched directly to Camp Pittman. The last six months of 1984 included four months on the Border. The reason I remember, actually I don't need to remember, we were authorized the Combat Zone Tax Exclusion. I still have my DF's for 1984-1985 and 1985-1986.

I can name pretty much everyone who was up there in our section gathering Intelligence on those Warsaw Pact Divisions at that time, but wont, if they want to be identified I am sure they will identify themselves.

The CIA used that Intelligence we were gathering, vehicles, troop strength, Units and everything else, along with everyone else that was gathering intelligence, to do the analysis on Warsaw Pact Intentions and report it to the President. That report was declassified a few years ago and can be found in the CIA FOIA Reading Room online.

But after that mission, every single Cav member that participated, 2nd ACR and 1/1 Cav members were "inducted" into the 1/2 Cav.  Honorary Border Patrol.

The two units that were involved were 1/1 Cav and 1/2 Cav. At the time, LTC Richardson was in Command and LTC Meigs was 1/1's Squadron Commander.

We were awarded these Border Scrolls in formation, signed by LTC Richardson. And our Squadron awarded us our Spurs

The only reason this one is out is because I was going to trash it. Some Cav buddies talked me into not trashing it because it is part of history. The reason I was going to trash it, is because when I got it, my name was misspelled. Jarrell instead of Jarriel, happens all the time. So I tried to correct it with Whiteout and a stamp, no computers or scanners to correct it at the time. Of course I screwed it up. After screwing it up I folded it up three folds and just stuck it in some box.

It is too large to scan. Nobody I have checked with has a scanner large enough to scan it. I don't feel like scanning it in, in sections and stitching it together. These Border Scrolls are huge.

Every element was up on the Border during this period these particular scrolls were awarded for. Including Primary and Secondary Combat Elements. At the time, I was a Spc/4 Gunner, we had Primary Combat Element and were tracking Warsaw Pact Forces and reporting back on it.That was '84, '85 I made Sergeant, Border Leader Certified and did pretty much everything you could do in Border Operations after that. 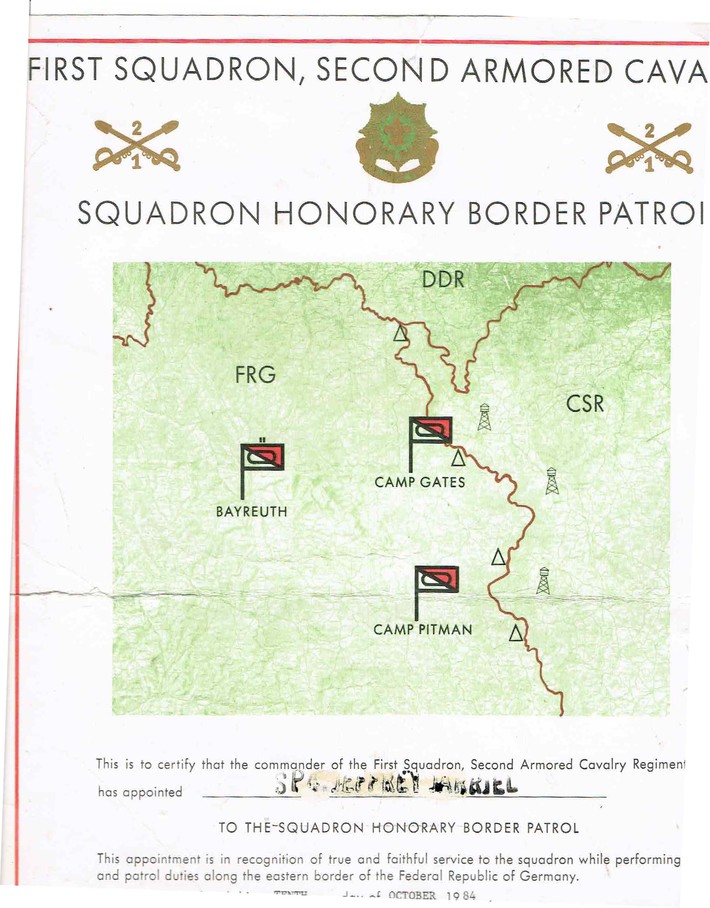 Entered on the rolls 30May72, Charles P. Graham, 56th Colonel of the Regiment

Entered on the rolls: 14 Feb 1990, signed by COL Leon Holder. Exactly one year later got blown up by a scud attack on Hafar al Batin when I was commanding a small detachment in 1st Cav Division.

The Regiment went through a couple re-flaggings at Fort Lewis, too, once in 1993 and once in 2006 with the Regiment starting from scratch.

Thank You Dave I was hoping they were still around , but the same thing happened to the White Horse Assoc. records of the 5th Calvary of Fort Knox deactivated all records were filed  , even the graduation photo's of each Troop were gone , now just a few entries in a book or ledger somewhere

Not likely those were kept, Charles. An awful lot of stuff went into the "File 13" when the Regiment left Germany.

Does anyone know were the Border Legion  records have gone to , a few years ago I found mine and my wife's large copy welcome us as a member of the border legion , we were in the 2nd squadron (camp Hof) 74-78

Comment by GERALD R JORDAN on November 26, 2013 at 6:01pm
I sure like to find any info about. Master sgt John. D bonetto